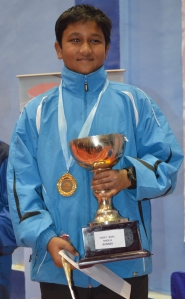 Mumbai boy, Ashwin Subramanian does it again.  He won the National Table Tennis Championships held in Gandhidham, Gujarat, between January 16th & 21st, thereby retaining his position as India’s No.1 player in the Cadet Boys’ Category ( Under 12 ). He beat Udit Bhattacharya of West Bengal in the best of seven finals, 4-2.  This is the highest award one can get in this category. He is also the Maharashtra State Champion in his age category as he had earlier won the Maharashtra State Championships Table Tennis Tournament, 2012 held in Aurangabad in December 2012.

The competition was very tough in every single round. Ashwin faced stiff resistence from Andhra Pradesh’s boy in the group stage. Though he won and qualified from the group, he had a tough draw with Bengal players breathing down his neck at every stage. He won in the decider against Bengal player, Sayan Chatterjee in the pre- quarterfinals. But the real scare came in the quarter finals where he came across another Bengal player, Soumyadip Ghosh. He was down 0-2 in the best of five games. In the third game he was down 0-3 and nothing was working for him. Ashwin took time out and started playing with calm and composure. He took the next three games thereby winning 3-2.

In the semi finals, he had another tough opponent, Anukram Jain, from PSPB. Ashwin lost to him in the quarter finals of the team championships. This time, Ashwin dominated and prevailed over him 4-1 thereby making the finals.  Though he had defeated Udit Bhattacharya twice earlier, he didn’t take his opponent lightly as this was the National Championships final. Ashwin tookan early lead winning the first two games very quickly 11-5, 11-5. But a lapse in concentration cost him the next two games which he lost 8-11 & 9-11. Realising that this is a big stage, Ashwin quickly regained his composure and closed out the match winning the next two games 11-5 and 11-2.

A class VII student of DAV Public School, Airoli, Ashwin practices in “Kalidas” indoor sports complex in Mulund (West) under the able guidance of coach Mr. K.K. Rai. Mr. Rai is the current Veteran National Champion. Ashwin gives all the credit to his coach for guiding him so well and making him a good & confident player. “I am very lucky to have a coach like him. He not only teaches me well, but also is a friend, philosopher and a guide” says Ashwin. Mr Rai too praises his ward. He says, “Ashwin put in a lot of hard work and is a good learner. He quickly tries to rectify his mistakes during match situations and that is a very good quality. I am very happy to have a student like him”.

Ashwin’s dream of representing the country will be realised soon as he consolidated his position as India’s no.1. The top 4 players will get an opportunity to be part of India camp. Ashwin is looking forward to wear the India T-shirt and represent the country. Good start for a promising career.

NEW DELHI: Lashkar-e-Toiba terrorist Ajmal Kasab, accused for the 26/11 Mumbai terror attack, was today hanged at Yerwada Jail in Pune at 7:30 am after President Pranab Mukherjee rejected his mercy petition.

According to Maharashtra home minister R R Patil: “26/11 Mumbai terror attack accused Ajmal Kasab’s mercy petition was rejected on November 8. He also confirmed that Kasab was hanged at about 7:30am on Wednesday.

A major fire today broke out at ‘Mantralaya’, the Maharashtra state secretariat complex that houses offices of the chief minister, key ministers and top officials.

Close to two hours after it was first noticed near the cabin of Tribal Welfare Minister Babanrao Pachpute on the fourth floor, the fire continued to rage till evening even as fire fighters battled the leaping flames.

Several people are trapped on the upper floors and terrace, prompting authorities to press into service contingents of the elite commandos of Force One and city police’s Quick Response Teams. Two teams from the naval dockyard were also rushed.

Panic gripped the sprawling building, the seat of state administration, after the fire, first noticed around 2.45 pm, spread swiftly to fifth, sixth and seventh floors. Towering plumes of blinding smoke soon engulfed the building making it difficult for the fire brigade to evacuate the stranded.

According to sources, nearly 5,000 people vacated the building within 20 minutes of the fire breaking out. Fire brigade personnel with huge hydraulic ladders were seen bringing down those trapped. Choking in thick black smoke, several people were seen standing precariously on the parapet and balconies, waiting to be rescued. Many could be seen rappelling down the ropes and drain pipes in a desperate attempt to escape.

Injured have been taken to JJ hospital, GT hospital and St George hospital in Mumbai. Team of 50 doctors is present at all the three hospitals to attend to the injured.

It was with a sense of awe that I stood on its decks. I knew the aircraft carrier was huge but it was only when I stood there that I got a sense of it. We had gone there the previous Sunday, a whole bunch of us cousins. It is not open to the public every day…only on specific days (like Navy week) and sundays. Usually when one is living in the same city one usually neglects to see the important places…and this museum is certainly important

– from the historical point of view. In fact when I stood there it almost seemed as if the history would rise up and consume me. The liberation of Goa in December 1961. The Indo-Pak war of 1971. Vikrant earning two Mahavir Chakras and 12 Vir Chakras. I had heard the stories from my dad and my uncles (all service officers) but this was the first time that I actually saw the ship first hand.

The museum, which was opened to the public a few years ago has beautiful black and white photographs with descriptions of air operations and landings as well as exhibits on the 1971 war. The ship’s forward engine room displays the propulsion system powered by huge steam turbines and technically inclined people would find this very interesting. There are aircraft on display here too, the very ones like Sea Hawk and Chetak helicopters, which have taken off and landed in action from the Vikrant’s flight deck. Besides there are also submarine models, diving equipment, bombs and mines which are on exhibit. Plus on

certain specific days (Navy Week) a documentary film is screened. People are also drawn to the flat, expansive length and breadth of the flight deck, deck-landing mirrors costing crores each, a giant hanger lift which can lift hundreds of persons at one time, the ski jump arrangement and arresting gear on the flight deck. And for a bit of shopping, there is a curio shop which sells mementoes like caps with the Vikrant logo (Rs 60- each), key chains (Rs 25 each) and even large coffee mugs (Rs 120- each). And yeah, a cafe where you can have a bite on tables shaped like propellers! We didn’t visit the cafe, but it sure sounded like fun! Well, the musuem happens to be a big hit with families and children. School visits are common. Entry tickets are Rs 40/- each, for adults and a half ticket for children under 14. There is extra charge for carrying a camera.

Vikrant (Sanskrit vikrānta = “stepped beyond”, i.e. “courageous”, “victorious”) was India’s only carrier for over two decades. It has an interesting history and you can read news reports about how she was procured and what she did during the war here and here and get some more information from this Bharat Rakshak site.

The great ship has traveled or rather, steamed, a total of 4,99,066 nautical miles, about 15 times around the world. Interestingly, the carrier might be preserved for posterity – the only wartime constructed British aircraft carrier to be under possible preservation.

The ship is docked near the Gateway of India, at the naval docks and entry is through the ‘Tiger Gate.” If you are in Mumbai, check it out.